From the Idol Threat blog, with our thanks for the very kind words!

Been taking it kind of slow lately but will definitely pick up in speed soon, for now I just wanted to update real quick to let everyone know of a free show coming up. Anatomy of Habit is somewhat of a supergroup made up of former and current members of various Chicago bands including drummer Dylan Posa of Cheer-Accident and Greg Ratajczak the guitarist from the death/grind duo Plague Bringer. The band doesn’t sound like what you’d expect from the combination of all these different genres, and in the grander scheme of the underground they actually sound quite accessible (especially considering that Mark Solotroff from the noise group Bloodyminded is the lead singer.) 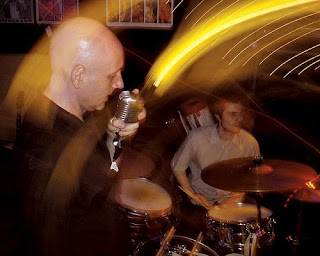 According to the band Anatomy of Habit formed in October 2008, following the dissolution of Animal Law. I first saw them at what I believe was their 1st or 2nd show at a previous free Empty Bottle Monday night. I actually went to see noise experimentalists The Human Quena Orchestra (who are very nice guys by the way) and had no idea who any of the other acts were. I was happily surprised when AoH performed, and without trying to be too hyperbolic I almost could not believe what I was hearing. I think the closest point of comparison I can think of is the Swans, but drawing comparisons to iconic bands aren’t usually a good idea and they are also way more than a mere Swans clone

They performed 2 songs for a little over 20 minutes and I was instantly hooked. Anatomy of Habit became the band that I always talked about when the subject of local bands came up, and I can’t recommend them enough. Mark and Greg have both said that they’re aiming for a debut release sometime in Spring, but in the meantime they’re playing tons of shows (and keep checking for more free Monday shows at Empty Bottle, they’re all usually pretty good.) Here’s footage from one of their performances (taken from Acid-marshmallow.com) but like most videos it doesn’t really do them justice so I suggest you come experience them for yourselves Monday 2/15, 9:30 at The Empty Bottle (FREE)

BloodLust! is no longer soliciting demos for future releases and is not accepting any music sent to the label for consideration. Thank you for your understanding.